On Saturday evening, the NBC Nightly News showed a report by correspondent Sam Brock which surprisingly portrayed Florida as as an economic success because of its less strict anti-COVID regulations, as opposed to California and New York, leading many restaurants to relocate to Florida.

On the down side, it was not mentioned that well-managed Florida is controlled by Republicans while California and New York are run by Democrats.

After weekend anchor Jose Diaz-Balart set up the report by linking the pandemic to "fueling the economic boom" in Florida, in the pre-recorded piece, Brock began by noting that many businesses are "migrating" to the state.

Then came a soundbite of restaurateur Craig O'Keefe complaining about regulations in California: "You know, California, our restaurants are still outdoor dining only. The hospitality industry at 25 percent and 50 percent ii these companies are just not going to be able to stay afloat. Not now, not ever."

Craig O'Keefe's San Diego-based Cliques Hospitalities is finding more fertile ground in Florida, where restaurants can open at 100 percent indoors. O'Keefe says with five more properties on the way and hundreds of jobs at stake, safety and growth can co-exist. The lure of different rules has ushered in a wave of high-profile New York restaurateurs. From South Beach to Palm Beach. La Goulue has been a Manhattan mainstay for half a century.

BROCK: Was it so difficult that it actually pushed you to leave New York and come down to Florida? 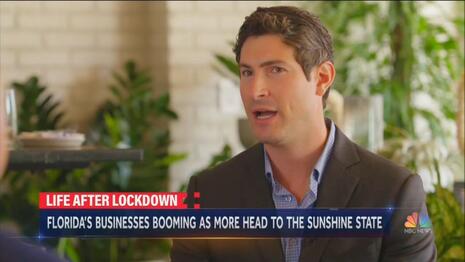 Toward the end of his report, Brock informed viewers that, in spite of the differences in anti-COVID regulations, there has been little difference in per capita infection rates among the three states. "Florida so far has reported 1.9 million cases of COVID and more than 31,000 deaths, but NBC news figures show despite vastly different rules California, Florida, and New York City have nearly identical per capita case rates. Better than the majority of the country."

This episode of the NBC Nightly News was sponsored in part by Prevagen. Their contact information is linked. Let them know you appreciate such refreshing reporting that debunks much of the liberal media's push for more pandemic restrictions.